The Inno+ environmental report assesses the performance of four different combinations of technologies from the Inno+ portfolio. The tool models broiler and pig production systems, covering different impact categories through the use of Life Cycle Assessment (LCA) methodology. LCA is a research method to gain insight into the full life cycle of a product or service, from cradle-to-grave. The ReCiPe methodology (Huijbregts et al., 2016) is used to calculate the Life Cycle Inventory.

In the animal systems modelled we have as main inputs feed, energy, water and bedding materials, and as main output living animals, dead animals (mortalities), manure and various types of emissions. 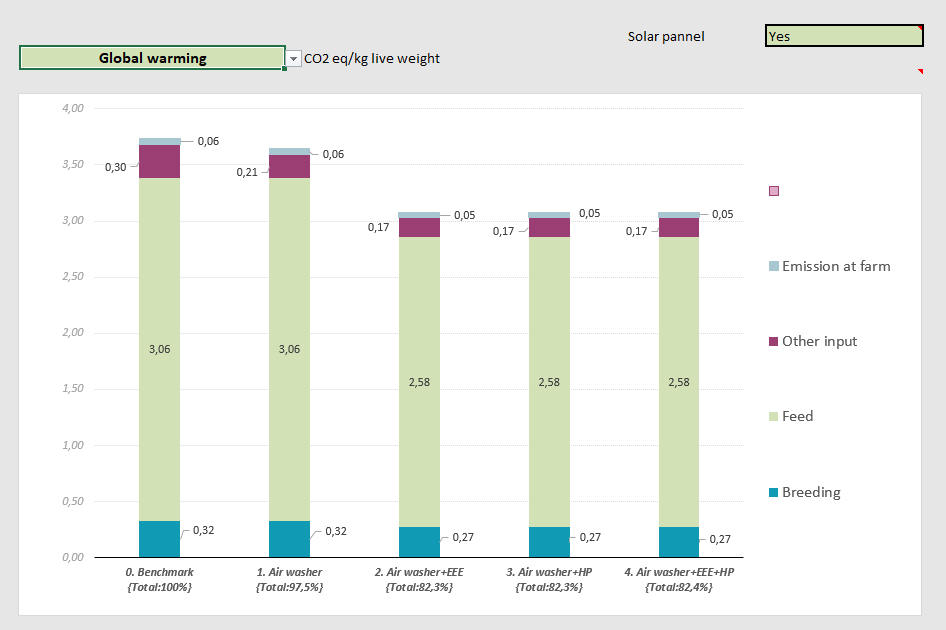 The broiler production system  consists of two main stages: breeding stage (including hatching) and actual broiler production (Figure 3). A fully indoor manure management system is assumed. All the inputs are considered through the use of background processes from the Agri-footprint database (Blonk Consultants, 2019).

The pig production system is characterized by two sub-systems: in the first one the sow gives birth to the piglets (breeding) that are then reared to approximately 25 kg, while in the fattening stage the piglets are grown to a finishing pig (116kg), that is slaughtered (Figure 2). A full indoor manure management system is assumed. All the inputs are considered through the use of background processes from the Agri-footprint database.

Link to: ‘The best piglet house in the world’
Download here

Link to: ‘The best piglet house in the world’
Download here

Emissions at farm level (methane, particulate matter (fine dust), ammonia etc.) are modelled based on international standards, such as IPCC (2006) and EMEP/EEA (2016).
In the INNO+ tool, a benchmark and 4 improvement scenarios are modelled:

Benchmark scenario: a standard Dutch broiler production system. It does not include any air scrubbing system and has been modelled based on national average animal performances (Wageningen UR, 2017).

1. Airscrubber implementation: the first intervention consists in the use of an air scrubber (chemical or biological), with consequent abatement of ammonia and particulate matter from the air but requiring extra electricity and water.

2. Triple EEE (‘Energy, Efficient, Economic’) implementation: the second intervention consists of extracting heat from the exhaust air with the air scrubber and recirculate the heat to preheat the incoming air of the stable. This in order to reduce the risk of respiratory disease and consequent stress.

3. Heat Pump implementation: the third intervention consists of the implementation of a heat pump that boosts recovered heat with electricity in order to reduce the use of natural gas.

4. Triple EEE and Heat Pump implementation: the combination of interventions 2 and 3 provide round benefits together with lower natural gas consumption.

For all 4 interventions it is possible to implement the use of solar panels in order to substitute the normal electricity grid with photovoltaic electricity.